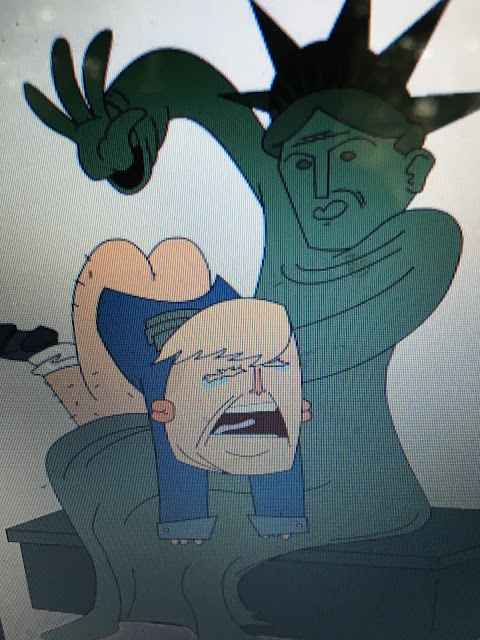 Did Donny ask for this after being booed at sports events? 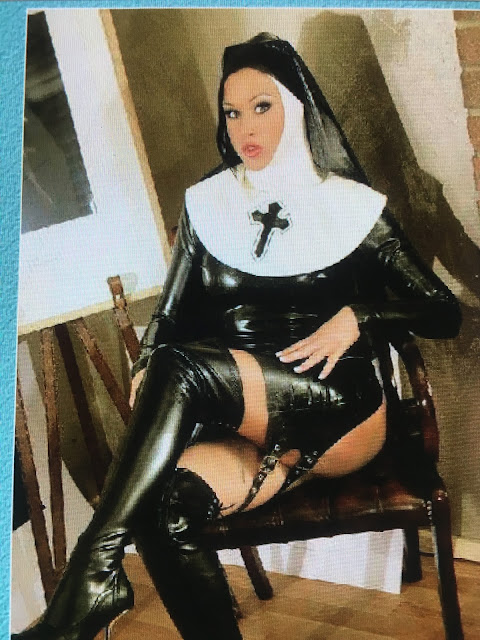 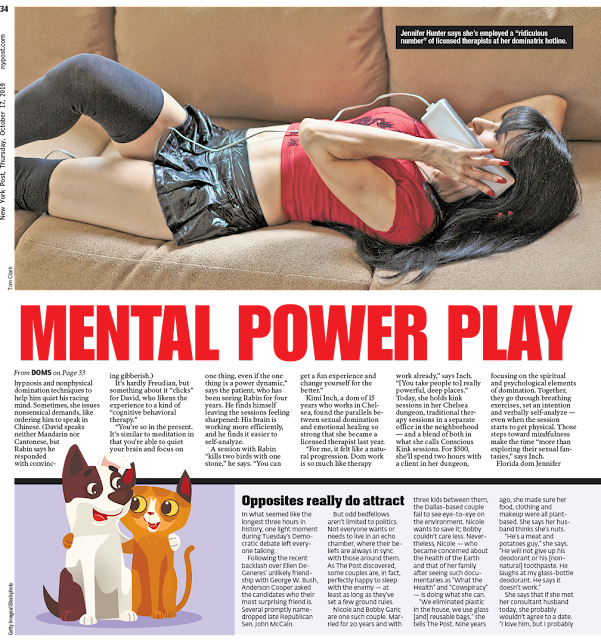 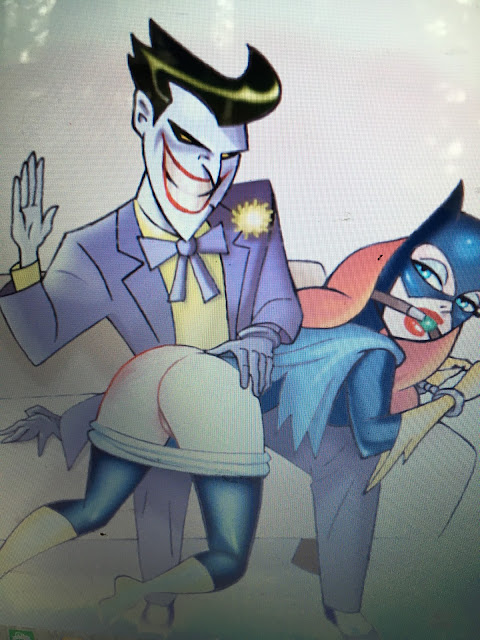 The Joker and Batgirl 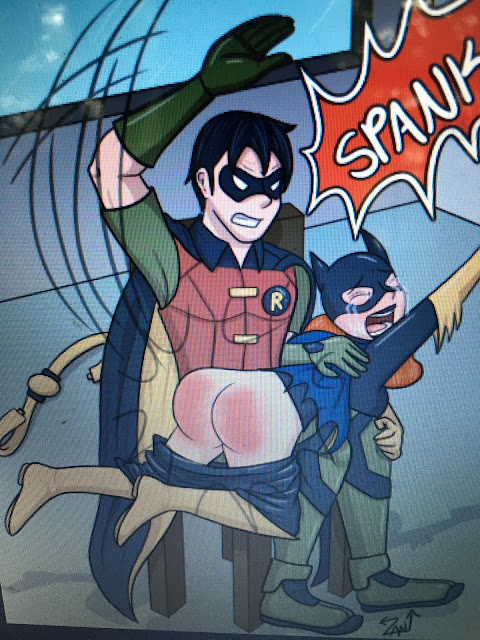 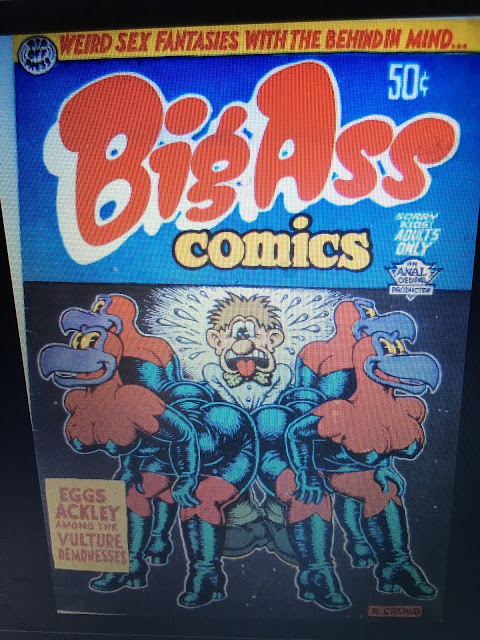 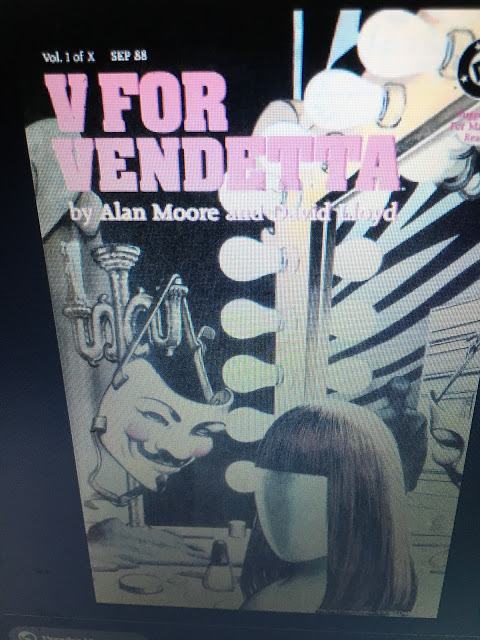 The Legalization of Birth Control

Veterans of Resistance to ChristianTerrorism (11.12.06)

It was always fun to do the Spanksgiving shows this time of year. When no live guests were available, I would do all the voices myself, as well as providing the spanking sounds. Usually the spanking was provided by a nun or evangelical figure. A classic Spanksgiving show is linked in this post.

There are many pertinent links also here, including tons of music. If you only check out two links, let them be These Dominatrixes Double As Therapists, featuring friend and Bookburner Jennifer Hunter; as well as The Forgotten Father of the Abortion Rights Movement, featuring longtime friend Bill Baird. In the Philly area, please check out Project Safe.

Have a spankingly delicious holiday.

I tend to agree with those who speak of the pitfalls of feeding attention to a narcissistic parasite. It is a bottomless pit until one eventually has to say: no I did not whisk away unsuspecting kinky stoners on a spaceship. However, I still cannot see passivity as an option. Therefore, the Nancy Mergatroyd site shall return. Details to follow. To everyone who is not a psycho and has no learning impairment: This is not due to views or “criticizing” Susan Sarandon. This is due to multiple, undeniable acts of harassment, stalking and cyber bullying. And of course the fake site that bears my name. I would have the same view about posting in my name, even if the content was not laughably stupid and posted by a psycho. It is moderately amusing that Nancy's mental state can enable her to think that it's a good idea to post political ramblings on a fake site that she runs.

The latest attack on me has unintended humor. Extreme actions are now rationalized as some kind of semi-coherent gender issue. Opposing her actions means one can be labelled a “misogynist.” Actually, let's indulge in this premise from Nancy's fantasy world for a minute, just for fun. The misogynist film Bonnie and Clyde will need to be remade. Clyde can meet the same fate, but Bonnie – the true victim in this story – will get probation. Also, misogynists will need to finally overturn the convictions of the women in the Manson cult. Obviously, the mental health professionals who recently did a powerful study on women and narcissism will need a good spanking.

Now I have more than a simple script proposal for a potential Lifetime Channel special. Actually, I believe there is a potential series. The channel has presented several with less to work with. My fictional character stalks, commits computer crimes, mentally decompensates, hallucinates Russian agents everywhere and shriekes that her extreme actions are somehow relevant to other women.

The Forgotten Father of the Abortion Rights Movement


These Dominatrixes Double as Therapists


The Politics of Spanking


Asylum Street Spankers – If You Want Me To Love You


Motorhead – No Voices In The Sky


The Herd – From The Underworld


Screamin Jay Hawkins – I Put A Spell On You


Fire Tiger – Way To My Heart


Julie Driscoll – Season of the Witch


Barry Adamson & Anita Lane – These Boots Are Made For Walking


deux furieuses – My War Is Your War


The Ronettes – Baby, I Love You


Goat – Hide From The Sun


System Of A Down – Psycho


Prophets of Rage – Legalize Me


Mushroomhead – We Are The Truth


Aynsley Dunbar Retaliation – Down, Down and Down


Meryn Ruppert and Bbright – The Night


The Gourds – all tracks


The Yardbirds – I'm Waiting For The Man – live


Gang Of Four – To Hell With Poverty – TV Live


The Tri-Tones – She's My Witch


Beyond The Valley Of The Dolls soundtrack – In The Long Run


Sonny Rollins – There Will Never Be Another You – live –Denmark 1965


Swans – It's Coming It's Real


Neil Young & Paul McCartney – A Day In The Life – live


The Beatles – You Know My Name (Look Up The Number) –backwards


George Chambers of The Chambers Brothers Dies at 88


The Muff's Kim Shattuck Dead at 56


RIP Dave King – the designer of the iconic Crass logo


Rocky Horror Picture Show – Don't Dream It, Be It


Ellen DeGeneres Gets Twitter to Pull Video Criticizing Her Bond With W. Bush


more footage of trump being booed and 'lock him up'


V for Vendetta: The Revolutionary Speech


The Adventures of Hercules

Idiot of the Month: Ann Coulter


“ATTENTION DEMOCRATS: Trump had Baghdadi taken out before the ISIS leader could endorse Sanders.”

Centrist Democrats Have a New Idea To Win: Ignore Labor and Give Trump a Major Trade Deal


Here's The Proof That Anti-MedicareFor-All Dems Are Lying


Why AOC Decided To Pick Sides in 2020 Election


After Sanders Says West Virginia Working-Class Base Will Support Bold Vision, Manchin Says His Vote “Wouldn't Be Bernie” in Head-to-Head With Trump


Ocasio-Cortez: Medicare-for-all not a dream


Mass Incarceration Costs $182 Billion Every Year, Without Adding Much To Public Safety


Trump Is Waging a War on Labor Unions, But You Wouldn't Know It from CNN's Dem Debate


Reaganism Must Be Defeated Once and for All

5 Signs You're Dealing With a Dangerous Female Narcissist


Psilocybin Sessions: Psychedelics Could Help People With Addiction and Anxiety


Michael Vick Dog Fighting Survivors: Where Are They Now?


Kim Gordon interviewed: “The end of capitalism is coming”


'(This Is Known As) The Blues Scale:' Outtakes From The Sonic Youth/ Nirvava '91 European Tour


Piecing together the story of midwest punk's great lost talent


Music is Medicine, Music is Sanity


Rage Against The Machine Announce a 2020 Reunion


Let's Talk About the Taboo of Sex

Posted by Reverend Bookburn at 8:50 PM