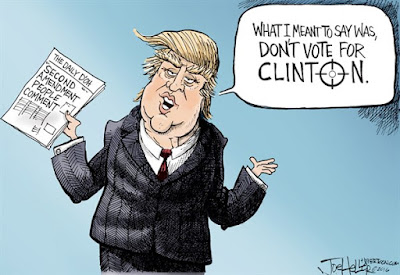 2016 US Election Endorsements From ISIS

We the leadership of wish to encourage all Americans to vote for Donald Trump, Republican candidates for Congress and Governors’ offices. They most represent our interests for the future. They destroy lives, the economy, the environment, survival programs and the future on a grander scale than we could ever dream of. Plus they support our position of merging church with state.

ISIS is pro-life and shares the views of most Republicans in public office regarding abortion, birth control, LGBTQ rights, sexual freedom and censorship.

We love Trump and how helpful his rhetoric has been for our recruitment efforts. Plus we enjoy seeing what his sons do to animals. When we watched his speech, during which W. Bush ally/ pedophile/ ex-Congressman Mark Foley sat right behind him, we knew he was one of us. We loved Trump even more when he spoke of a “second amendment” solution regarding the woman he’s running against.

We love Trump’s mouth. His love affair with Putin, tantrums over critics, and professed desire to use nukes continues to give us a good laugh.

We never forget our roots. We loved Reagan and North for inventing modern jihad during the Soviet-Afghan war. Such generosity, propaganda, training and weaponry had been priceless.

George W. Bush also proved to be a great friend. Without him, we never would have amounted to anything other than whispering wankers.

Manson was such a fool. If he had waited for the Reagan presidency, he could have participated in the Contra war in Central America. That was Helter Skelter against civilians times tens of thousands! Plus the endless landmine fun in Angola! Rather than notoriety for his small-time casualty numbers, he could have received awards from Reagan and co-hosted television shows with North!

Anyway, thank you for doing so much for us. Please vote for Trump and the Republican candidates in all campaigns.

Good evening and thank you for coming tonight. My name is Melania Trump and I am a graduate of Trump University as well as my cereal box degree. I’d like to thank Barack for standing behind me throughout this amazing journey. and seven years ago. I got 99 problems but a comb-over ain’t one. Make America masturbate again! All in all you’re just another brick in the wall. I can’t get no satisfaction. I have a dream. Stand by your man. Ask your doctor. Straight Outta Hamptons. I wish I could sing Immigrant Song by Led Zeppelin. Space – the final frontier. It’s getting hot in here. You’re a mean one Mister Grinch. I dreamed I saw Joe Hill last night. Don’t you want somebody to love? I am the walrus – goo goo goo joob. I’m strong to the finish cuz I eat my spinach. I see a red door and I want to paint it black. Make Germany great again! We spin, you decide. To be young, gifted and black. Keeps me searchin for a heart of gold. Twinkle twinkle little star. Imagine all the people sharing all the world. Billy Jean is not my lover. Bidi bidi bom bom. For truth, justice and the American way. We have learned beyond the shadow of a doubt that they have weapons of mass destruction. I only wanted to see you in the Purple Rain. And it burns burns burns the ring of fire. How much you spendin? Putin on the Ritz. Somewhere over the rainbow skies are blue. I am the Lorax, I speak for the trees. I still haven’t found what I’m looking for. Cuz I lust for life. Ziggy played guitar. We have nothing to fear but fear itself. Seems to me you’ve lived your life like a candle in the wind. Get ready to rumble. We cannot be white chicks. This is the dawning of the age of Aquarius. Dancing in the street. Everything you own in a box to the left. Green Acres is the place to be. Before the fall of the house of Usher. We are the champions. Michelle Mabelle these are words that go together well. Thank you Donald and his brave hunting children! Good night!

Win a Date with Roger Ailes!

The folks from The Reverend Is In show want everyone to have an opportunity to have a dream date with fox “news” propagandist and harassment extraordinaire Roger Ailes.

The lucky winner will get to experience having Ailes face one inch away from yours as he touches you and makes animal noises.

Email Rev. Bookburn with a resume. If you act now, you can get two enhanced interrogation sessions with fox “news” fake CIA agent Wayne Simmons.

Bill Baird
While watching Original Sin: Sex, it was obvious that there would be much discussion about birth control and abortion rights. The show was on the National Geographic channel, now owned by Rupert “Mr. Jerry Hall” Murdoch. Amazingly, the show handled both subjects well. Even more amazing, the show acknowledged the historic victories of Bill Baird. Baird has too frequently been written out of history, even in some bullshit pro-choice books and women’s studies programs.

Baird’s fight led to the Supreme Court legalizing birth control for non-married people in 1972. This set the primary legal precedent for legalizing abortion in 1973. The show actually acknowledged this and provided stunning footage. Great commentary on the case from Penn Jillette (who recently released his new book Presto!). Hopefully, Baird’s book telling the entire story will be released soon. Meantime, people can get some of this vital history at ProChoiceLeague.Org

So …credit where due... Murdoch, who has one of the greatest ever track records anywhere for bullshit, unwittingly provided an informative and entertaining program. Just don’t tell him.

At the risk of shocking friends, I watched a show about Bob Dylan. Since the show focused on Dylan’s music from 1961 to 1965, the period when I believed he didn’t suck, it seemed like a good idea. Actually, the show was great and even acknowledged others in the folk scene. It was even more pleasing to see footage of the late Phil Ochs on this program. This gave me an idea: for every 200 features in the music media that provides further saturation of Dylan, there needs to be one significant presentation of Phil Ochs. There is nothing wrong with occasional exposure to the real thing.

It’s embarrassing for our species that even a small number of people fall for the “libertarian” bullshit. They are little different from the tea-psychos who demand that corporations have unlimited “liberty” to loot, as well as destroy the environment.

I am no fan of Hillary Clinton, but am certainly sick of the idiotic non-scandals that saturate the corporate media. To those who want to further exploit the deaths at Benghazi, do a little research about the attacks during Reagan and both Bushes. Needless to say, these same assholes would have been screaming if anyone spoke against the party line after any such attack. Further, the email non-scandal is hilarious. The people who are hysterical about this and write bullshit books were asleep during the W. Bush years. It may be time to wake up and discuss real issues.

Jello Biafra on Kink.com, DJing, Politicians & More on Under the Golden Gate live

Posted by Reverend Bookburn at 2:28 PM No comments: