The Rise of Christian-Sharia Law 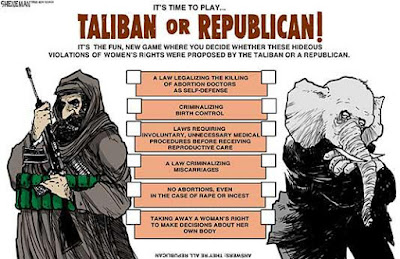 It's time to play Taliban or Republican 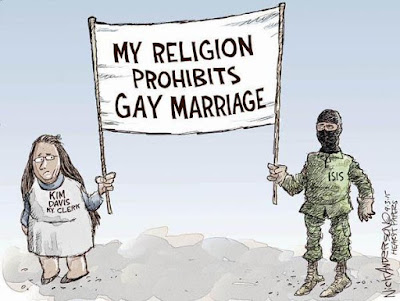 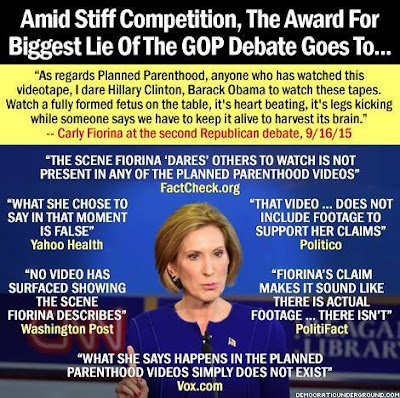 
next show: The Rise of Christian-Sharia Law

When you hear someone babbling about Sharia Law, is it because s/he believes in freedom and justice? Or is it due to that person pushing a competitive version of theocracy? Obviously, it is usually the latter. The rabid fight against abortion, gay rights, and separation of church/ state reveals this daily.


Further, there is no speaking out from such people against the 35+ years of Christian terrorism perpetrated in this nation, mostly at abortion clinics. Their bigotry and hatred is against people they view as like-minded rivals.


We shall further expose such madness, as well as provide comic relief and appropriate music.


If we can pry Tommy Teapsycho off his fellow-married affair of the week, we'll have him on the show as a live guest.


This will be a show to remember!


Since we are presently unable to stream live, this show shall be recorded and available for free at Radio 4 All, thanks to Pastor Rex Cat. (see links below)

Countdown to our Farewell show


We are in a countdown to our last show. Life circumstances and survival issues have made the decision to end necessary. If all goes well, we shall do our 15th anniversary show in January and a farewell show in February. We shall remain active on this site and provide commentary, entertainment and links. If there is a res-erection of this show, it will include co-hosts Pastor Whoremaster and John the Craptist. Such a rebirth would be announced here first.


November: Bush and Other Psychos


Funkadelic – Free Your Mind And Your Ass Will Follow


The Story of Funk – One Nation Under A Groove


Sun Ra – Space Is The Place


Bad Religion – How Could Hell Be Any Worse? – full album


A 12-Disc Compilation of Female-Fronted Punk


Dope Guns and Fucking Up Your Video Deck, Vol. 3


Temple of Vines– It Infects The Children First (Experimental Metal)


Metal Injection – On The Record – The Future of Metal


Corrosion of Conformity – In The Arms of God – full album


Sandy and Richard Riccardi - Shut Up and Do Your Motherfucking Job! – song for Kim Davis


Message In The Sand – The Album – for the Syrian refugees


‘Seven Up:’ The Mind-Expanding Krautrock Album Timothy Leary Made On The Run From The Law


Henry Rollins on the Joy of Writing

more of this is needed

Payback Is a Bitch for Abortion Clinic Protesters, Thanksto a Brilliant Landlord


The Deadly Hypocrisy of the “Pro-Life” Movement


R.E.M. to Trump, Other Pols: ‘Go Fuck Yourselves’ for Using Our Music


What Would It Look Like To Decriminalize Sex Work? – New Zealand

nutjob of the week:


Open Borders: Baby Aylan’s Death Should Not Be In Vain


We Walk Together: A Syrian refugee family’s journey to the heart of Europe


No more lies about the 43 disappeared students from Ayotzinapa


Kareem Abdul-Jabbar: Here’s How Donald Trump Responded to My Essay About Him


Oh, This Is One Yuge Cock-Up


Michael Moore: Where To Invade Next – official teaser trailer – 2015


This Changes Everything – international trailer


Robert Mapplethorpe – The obsession for beauty


Spitting Image – Best Of – Is Nothing Sacred?


Real Talk – Why Does Music Matter?


A Deflategate Slapdown of NFL and MSM


There Is No Illuminati, You Idiots


As Candidates Tied to Guatemalan Army & Oligarch Vie for Power, What’s Next for Popular Uprising?


America Demonized Its Poor: Ronald Reagan, Sam Brownback and the Myth of the “Welfare Queen”


6 Ways You Just Got More Power Over Your Credit Score


The Collapse in US Workers’ Wages Can Be Directly Attributed to the Presidency of George W. Bush


Chris Christie’s Criminal Woes Are Far From Over


Labor Day 2015: Stand Together and Fight Back


Politicians: Servants of the Wealthy


Keith Richards: “The Grateful Dead is Where Everybody Got It Wrong”

the swinging bullshit artist is back

Get Ready for the Most Insane Book about the Clintons yet, because Roger Stone is Bored

Charles Manson Revisited: What Drew Reagan-era Bands Like Sonic Youth to the Seediness of All Things Manson?


Kim Davis, possibly the next Mrs. Huckabee, is only supported by ignorant bigots. There may even be a ghost-written book marketed towards Christian-Taliban types. She is clearly an inappropriate person to have her current job. - Rev. Bookburn (Lolo Radio)


The psychos in public office who are using the bogus videos as an excuse to defund women's healthcare and legitimate rights need to be out of office. Late-term abortion bans are even worse and threaten the lives of countless women. These Christian-Sharia Law types must be stopped. - Rev. Bookburn (Lolo Radio)


I'm not sure which is worse: total bullshit artists like Alex Jones and Roger Stone, or those who are gullible enough to take them seriously. In these hard times, it is necessary to be more tuned in to reality, not chasing delusions and serious falsehoods. - Rev. Bookburn (Lolo Radio)


The inhumanity of some world leaders, as well as commenters here, towards the Syrian refugees, reveal the lowest elements of the human species. #HUNGARYSUCKS


Goodies until the next show:


Rev. Bookburn’s Mind and Strength show (6.13.15) has been uploaded and available at any time for free


foreplay: Avengers – I Believe In Me

The Donnas – I Don’t Want To Know

The Doors – The Unknown Soldier

The Clash – The Prisoner

Monty Python – Every Sperm Is Sacred

September 2015: The Rise of Christian-Sharia Law

November: Bush and Other Psychos

Posted by Reverend Bookburn at 9:46 PM No comments: